Two years of lockdowns and distancing forced the growing climate movement into the online world. During 2020, as the world stood still, emissions went down 7% globally, showing us what is possible, if governments were to take emergency measures. However, as world leaders rushed to declare the pandemic over and eliminate restrictions, so did emissions rise in full force. Nevertheless, a lowering of pandemic restrictions also has meant an opportunity for the streets to be occupied again with the fury of youth with no future. On Mar. 25, youth around the world inspired by Greta Thunberg’s Fridays for the Future movement called for a climate strike, as they have every Friday since she began her school strike in 2018.

From New Delhi to Berlin, Stockholm to San Francisco groups of young people marched again to demand their right to a future. Following that, on Apr. 22, Earth Day, once more youth took the streets, taking the day as an inspiration to continue the fight. The actions shone a light on the role of big banks and corporations, like BlackRock, that continue to invest in fossil fuels, on the unfair anti-immigration policies that are being imposed on climate refugees, and on the connection between wars and the fossil fuel industry.

Although the size of the protests is still small considering the numbers in 2019, they are a step in the right direction and towards bigger fights to come. 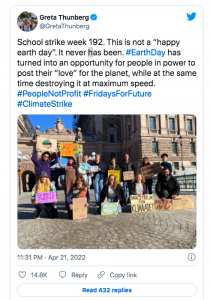 The rapidly warming of the oceans, and the consequences that come along with it, are yet another reminder for us that we cannot continue to dump greenhouse gasses into the ecosystem without expecting huge consequences. …

Food Insanity With or Without COVID-19