In India, nearly two months after they started, massive protests against three agricultural “reform” laws continue unabated and even grew in the past week.

The laws, passed in late September, eliminate rules about who farmers can trade with, allows private traders to hoard agricultural commodities, eliminates minimum prices, and allows farmers to sell their products outside their home state. Prime Minister Narendra Modi says the current regulatory system is broken, and that the new laws “liberate the farmers from such adversities!”

But the farmers say otherwise! They see the longstanding regulatory system as protection against the powerful businesses and forces of “the market” searching for profit at their expense. They believe that if the new laws go into effect, prices for agricultural commodities will drop below what they need to survive, and that they will fall into dependence on middle-men traders out for a profit.

The farmers, nearly half of India’s 1.3 billion people, are right to see these “reforms” for what they are – a big business push to modernize a sector of the Indian economy in pursuit of greater profit. We’ve seen these “neoliberal” reforms before. In Chile after 1973, in England in the mid-1980s, in the US in the 1980s and 1990s, and others. The outcome is always the same: the 1% gets richer while workers and farmers lose any protections and stability they had and actually become poorer!

But the farmers and workers have the power! They are the hundreds of millions, the people who make society run. And if they continue to organize and build their power together, they can not only stop the “reforms” from taking effect, they can even change the entire system! 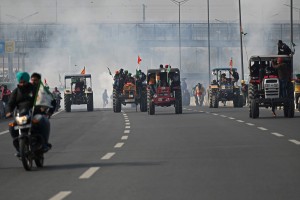 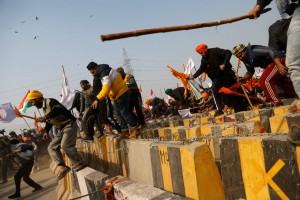 Climate Activists in India Jailed as Threat to State

Victory for Indian Farmers Show Organization and Solidarity Can Win!

After defeating the laws that would have eliminated vital protections for Indian farmers, one of the protesters said the victory felt “like you’ve conquered Mount Everest.” …

COVID in India: The System “Has Reached its Limits”

India is being overwhelmed by COVID-19, its capitalist system being unable to handle such an event. …