On Saturday, October 29, the Workers’ Party of Argentina (Partido Obrero) gathered over 35,000 people in Buenos Aires’ famed Plaza de Mayo for an impressive rally for a working class solution to the economic crisis. Red flags inundated the huge square. The Workers’ Party’s Legislative Deputy Romina del Plá declared from the podium, “Out with the capitalist politicians so that the left and the workers may rule.” There were additional rallies in the provinces as well.

The massiveness of the PO rallies would not have been possible without the struggle and the victory of an impressive tire workers strike. This was led by militant leaders who organized the strike democratically, fought for 5 months, and won a wage increase that brought them above the 100% rate of inflation, and indexed their pay going forward to the inflation rate as well. This was an achievement that has fueled the courage of other sectors in the working class. Nor would these rallies have seen this level of success without the exponential growth of the struggles of the unemployed, in organizations known as “Unidad Piquetera.” Added to this was the decision of the doctors and high school students to confront the current government, along with a strike of the teachers of Buenos Aires. It was all of the ongoing struggles that the Argentine people have been making against economic austerity imposed by the current government of Alberto Fernández that made this possible. This administration, which claims to be progressive, has negotiated an austerity plan with the International Monetary Fund to force the working population to pay a debt that was neither incurred by their choice nor made for their benefit, but rather to benefit capitalism.

These fights together show the way forward out of a huge economic crisis. The Partido Obrero sees its role as promoting the struggle of the workers and placing itself at the head of these struggles so that the banners raised by the popular movement are those of the working class, and those of socialism.

The complete video of the event is available to watch and share here with friends and relatives who understand Spanish. 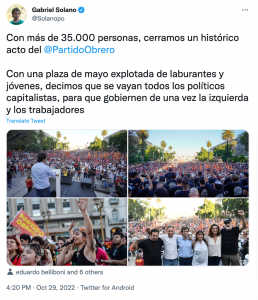 Food Deserts in a Pandemic

COP26: We Must Rely on Ourselves, Not the Governments of the World!

The climate crisis is GLOBAL. And we see people from every corner of the world standing up to say we must put an end to it. …

May Day 2021: Celebrating the Struggles of the Past — Preparing Those of the Future …