As North Americans and Europeans get vaccinated against COVID-19 in ever growing numbers, the stunning inequality in the global distribution of the vaccine is becoming clearer. While the U.S., Europe, Israel, and a handful of other wealthy nations have at least partially vaccinated 20% or more of their populations, many nations, the majority of them in Africa, haven’t even vaccinated one percent. The disparities are not just about wealth, but about race. The countries that have a long history as imperialist, colonialist powers are the whitest, while those who had been colonized over hundreds of years and remain today among the poorest, are the victims of long-standing white racism.

Wealthy nations have bypassed an international system of vaccine acquisition and distribution called Covax, instead purchasing huge quantities of vaccines directly from manufacturers and leaving limited supplies for distribution among poorer nations. Although they make up only 16% of the world’s population, these wealthy nations have already purchased more than 60% of the global vaccine supply! This means not only that the U.S. or British population will be inoculated first, it also means that they may be withholding vaccines and driving up prices, making it even harder for poorer nations to access desperately needed supplies.

At current rates many poorer nations won’t have significant access to the vaccine until 2022, and most of the world’s poorest nations (indicated in red on the map below) won’t have significant access until spring of 2022, at least one year from now. This means it is likely that every African nation will continue to see cases spread and deaths grow for at least another year! 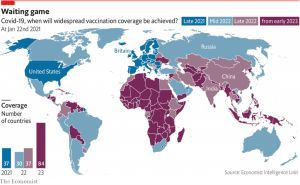 Kenya, for example, received its first batch of 1 million doses in early March. But that was one month after promised, and since then have only been able to buy another 100,000 doses from India. Because even these small batches stretch an already tight national budget, they are not sure when the next batch will arrive. At this rate, Kenya will be able to inoculate only 30% of its people by the middle of 2023! Meanwhile doctors and nurses work months without pay, with inadequate protective equipment, and fall sick to the virus, badly sickening many, killing some.

In a sane world none of these inequalities would exist. Vaccines would be shared around the world, with all doctors and nurses in every nation or region being vaccinated quickly, along with vulnerable populations and other first responders, essential workers, again, in every nation or region at the same time. And the difference in timing between the first and the last would be as short as humanly possible.

The global maldistribution of COVID vaccines may seem almost insane at first glance. But it’s a completely logical part of the capitalist system driven by profit above all else. Only when we organize our forces and completely dismantle this profit-driven system will we be able to end these savage inequalities that condemn millions to suffering and early deaths.

How NOT to Fight a Virus

You would think that to fight the coronavirus, the government would pull together the best minds among relevant researchers and health care providers, decide what needs to get done, get industry to make the necessary supplies …

Where has the extra money you’ve been paying for gas gone? To oil company shareholders! …

A Return to Whose Normal?

This is what’s normal for their capitalist system, where normal has been the problem to begin with. Whether we accept a return to this normal or strive to bring about a new one will be up to us. …