Thousands of Tunisians, mostly young people, have taken to the streets in protest of worsening health and social conditions, as well as political repression, under the pandemic.

This January is the tenth anniversary of protests in 2011 that forced out Tunisia’s authoritarian ruler of 23 years, created a new, democratically elected government, and won rights to freedom of speech and assembly. They also sparked the Arab Spring that spread throughout the Middle East, pushing out longstanding authoritarian rulers and awakening millions to the hope of political freedom and a better life.

But since then Tunisians have seen wealthy businessmen govern the state in their own interests and the economy struggles from crisis to crisis. With an unemployment rate of 16 percent, a 30 percent unemployment rate for young people, and consistent corruption and police brutality, millions have failed to experience the benefits they thought political freedoms would bring.

Today, many thousands of Tunisians have been on the streets again, demanding changes they thought they had won ten years ago. “The only positive thing we got out of the revolution was the freedom to say anything we wanted. Maybe we understood freedom wrong, because we’ve made no progress in the last 10 years,” said a 24-year-old student protester. Another protester in a working-class district on the outskirts of Tunis explained, “We are out on the streets because we want social justice and work.”

What happened to Tunisians’ hopes for their revolution? The people of Tunisia made a political revolution in 2011, and inspired others in the Middle East to rise up against repressive governments. But they didn’t change the economic system that shapes both the political system and peoples’ daily lives. Changing political structures without changing the social and economic system offers just a glimpse of real freedom. We can’t have true political equality as long as economic inequality still exists.

The people of Tunisia are right to struggle to improve their lives. But to solve their problems, they will have to overthrow not just their political elites, but join with others around the world to challenge the global capitalist system that leaves them and other working people and oppressed people around the world to suffer year after year. They’ve shown they can build a powerful movement. They can do it again, and this time make the ideals of equality and freedom suffering a reality. 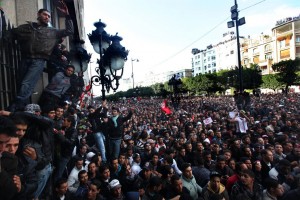 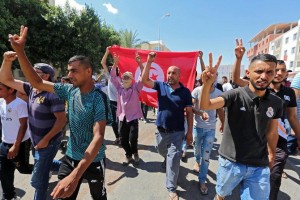