Tax Day was postponed by COVID this year, but it inevitably confronted us! Every year, we complain and make jokes about how ridiculous the tax collection system is in this country. Instead of wasting so much time on all these confusing forms, wouldn’t it be nice if taxes were collected from us automatically as they do in other countries?

Unfortunately, that is the least of the problems of this wasteful system. What about how all these tax dollars are spent? Income tax in the United States started in 1861 to fund the Civil War, and priorities haven’t changed much since. We are told that we pay taxes in order to fund essential public services and social programs. In reality, almost half of our tax dollars go to military spending.

Could the tax system be improved? For example, we all know that the rich use tax havens and other loopholes to avoid taxes. More generally, critics of inequality say that taxation should be more progressive (heavier on the rich and lighter on the working class). This is known as redistribution of wealth, and it might be worth fighting for if we could get the tax dollars to actually benefit us.

But isn’t it time we question the very idea of redistribution of wealth? If we lived in an economy that was democratically managed by us, the workers, we wouldn’t need to redistribute wealth, because we would distribute it fairly in the first place. We would get rid of unemployment and houselessness and stop the endless waste that our capitalist rulers thrive on today. Our distribution of wealth would benefit all people, not just a tiny minority. The waste of our tax dollars on the military industry, prisons, police, and bloated bureaucracies shuffling wealth around is just part of the obscene waste of the whole capitalist system. We need a system where all these are unnecessary, and then we won’t even need taxes. 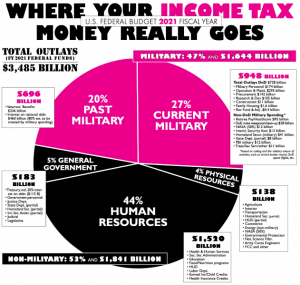 The Milwaukee Bucks shocked the sports world on the afternoon of Wednesday, August 26, after the players decided to boycott Game 5 …

U.S. Politicians are Guilty of Murder!

The U.S. is currently number one in all coronavirus statistics and far ahead of all …

Will Public Transportation Survive the Pandemic?

Before COVID-19, the New York Metropolitan Transit Authority served 8 million people daily. Since COVID-19, it’s losing $200 million per week and suddenly has a predicted deficit of $16 billion over four years …