From the wetlands in southern Louisiana to the major cities of the northeast, Hurricane Ida spent four days last week highlighting the tragic consequences that occur when societies built on profit encounter the effects of climate change, often spurred on by those same profit driven calculations.

Although the infamous levees around New Orleans held and saved lives, unlike in 2005, Ida still destroyed thousands of homes and buildings in Louisiana and other southern states as it moved northward, leaving millions with limited access to food, water, electricity, cool air, gas, transportation, and other necessities. Then it rampaged into the northeast, quickly dumping record amounts of rainfall in Pennsylvania, New Jersey, and New York, flooding parts of Philadelphia and New York, two of the nations’ largest and most densely populated cities.

It was in the northeast, an area almost never touched by serious tropical storms, that Ida had the most devastating consequences, exposing the fragility of our urban infrastructure. Heavily used urban highways, tunnels, subways, and transit systems were brought to a complete halt for hours, and remained only partially operational even the next day. Cars were left abandoned on normally crowded streets, businesses were destroyed, sewer lines overflowed, and main streets flooded. More horrifying, as if imitating a scene from the movie Parasite, poor working people living in basement apartments struggled to get out alive and in some cases died, trapped in their cramped, partially subterranean homes that are all they can afford in these high rent cities. Of the 43 confirmed dead in the northeastern states, 11 were found in basement apartments in New York City.

These multiple tragedies, leaving people homeless, without necessities, or even dead, offer yet another example of the consequences we face when our society is built around the pursuit of profit, rather than human need. Towns and cities and transportation systems have been designed based purely on what is most profitable for developers, construction companies, oil producers, and automobile companies. Our cities have been divided into segregated levels, with the rich in the safest areas, or higher up, while the poor live in cramped, poorly ventilated, street level (or below) apartments that become death traps when flooding occurs.

And in their reckless and insatiable pursuit of profit, the oil, auto, energy companies and others have spewed billions of tons of pollution into the air, virtually guaranteeing that global warming will continue. This guarantees in turn that bigger, stronger, wetter storms will continue to plague us in the future. And it will be working people, often immigrant, often people of color, who will pay the worst price. But it will affect us all.

If our society were one based on human need, and not corporate profit, things might be different. We might not allow people to live like sardines in cramped, stacked housing. We might not allow oil companies to devastate our atmosphere. We might move people out of harm’s way when we know deadly storms are coming, and we might be more prepared for those storms in the first. But this is not the current reality.

We can now see the outlines of our future if we allow the world to continue as it is – and it’s terrifying. But we can also imagine a different world, built around different priorities. It’s time to fight for that different world. But we need to start now. Worse storms, worse fires, worse droughts are coming. We don’t have much time left. 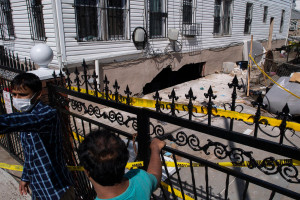 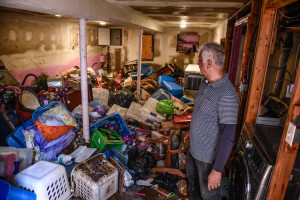 New Study on Global Warming: One Billion-Plus to Face Extreme Heat if We Don’t Fight for Change

A recent study finds that global warming will impact humanity even more intensely, and sooner than previously thought. According to the research, for every 1ºC increase in global temperature, one billion people will be displaced or forced to endure insufferable heat. …

The Capital of Indonesia is Sinking; Climate Change is to Blame

Indonesians can no longer have their capital in the coastline city of Jakarta because they are literally struggling to stay above water from the impacts of climate change. …